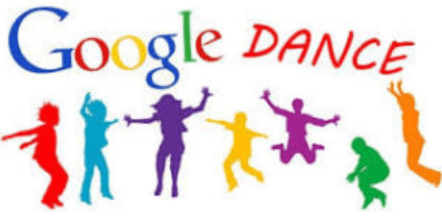 Unlike Google Dance Mar 2004, This September we all expected the new PageRank and cleaning the database with the consequent de-indexation of all pages that their spiders have been unable since last great cleansing, carried out in March ... but it has not happened .

What is a Google Dance?

Are the changes that occur in the Google algorithm from time to time and cause the results that appear in the top positions change places and "dance".

In September 2004, Google has been limited to publish results as a month; without modifying the PR (at least outwardly, since we can not be sure that the PageRank displayed on the Google toolbar is really what Google uses to calculate the sorting algorithm results) and Google has only shown some variation in It results ... But October came, and with it, the new PageRank.

Since when Google PageRank not recalculated?

For half the PageRank of web pages in June had not been recalculated massively.

Specifically, according to rumors, they had not been recalculated since the algorithm Check Sum http://google.dirson.com/noticias.new/0569/ began running online.

Changes in the calculation of PageRank

We commented in an article in March that after the Florida Update, Google had included in the algorithm PageRank a filter to discriminate the websites of large corporations or the same owner, who conducted trade links with the sole purpose of raising your PageRank . This filter appears to remain active.

This filter is a complex algorithm itself, and we explained in the article:

But let's see what Google has been doing these last 3 months:

25 August: big moves in the order of results

Moved first attributed to a Google Dance, but then, after a few weeks, the affected websites seen as recovering previous positions, so everything points to were tests in the algorithm.

They start running new results from all the material that Google spiders have collected until 30 August (except the homes of the websites that Google's updated every two or three days). begin serious doubts about whether the PageRank bar showing the PageRank that Google uses for its calculations ... and you think you have not updated data showing the bars, but if you use for your calculations.

Also on the site PageRank Watch, we can see some web that from that day, have the PageRank assigned or modified.

Some new features in Google searches

Searches in the pages of scanned books

We knew that after working with Amazon (A9, Amazon's search engine, the engine runs on Google), Google was able to look inside the books that Amazon is selling. Now, from Google it if you want to find results that appear within a book, you can make the following query:

This will show a first result with an icon indicating that it is a result that gives the words you want and appearing in a book. In fact, the search is done on http://print.google.com database of scanned books using Google.

The books belong to several online bookstores, not just Amazon.

In all likelihood, during this year we will discover more things about Google Dance September / October 2004 ...

Cassini and the Huygens probe to Saturn are coming ... with my ...

What is the Hilltop algorithm?
Scroll to top