When I talk about in class Postmodern communication and how Google Adwords fit (or not) in it, I realize that many students do not know this concept. If I see that I have time, I try to explain a little what the Postmodern Communication and what features it has, but usually do not have time to do it and also not part of the agenda that I teach Digital Marketing. To overcome this problem in part and publicize at least a small part of what the Postmodern Communication, here's this post.

The postmodernism It is a concept that makes sense when we counterpose to the modernity, Understood as the search for a scientific and rational basis in all disciplines. The postmodernism It is based on the opposite: to enjoy the diversity and contradiction ... to break the rules set by the company itself (Stephen Brown, 1992).

On issues Marketing Y Communication, the fact "post-modern"It has characteristic elements and explained in class: fragmentation, dedifferentiation (do not know whether something is fact or fiction [as in this case of the example that follows these lines]), hyperreality, chronology, pastiche, antifoundationalism (go against the established rules, the Anti Marketing Marketing is part of antifundacionalismo) And pluralism.

Find more information about postmodernism in the Wikipedia.

To illustrate this concept (in classes where if I have time to explain what the Postmodern communication) Put advertising such as video piece by DOVE (Unilever) for its "DOVE for Real Beauty"Created by the Canadian office of Ogilvy & Mather agency.

This video is a clear example of Postmodern Marketing communication: A video ad denouncing the manipulation of advertising images.

(The video is on YouTube but has disabled the function embed. You can see it by clicking here or clicking on the attached image.) 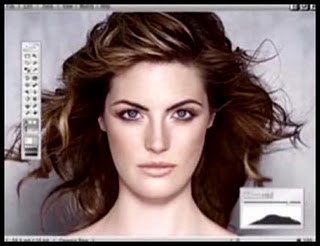 Some data on the spot:

To differentiate itself from competitors Dove and Ogilvy they decided to go for a marketing more emotional, designed to transmit values ​​of the brand, rather than focusing on a system based on product characteristics marketing as did the other brands (remember ads Nivea [that softens, moisturizes and tones], focusing on the product).

The spot aired for the first time in 2006 and made known the "Self DOVE Fund"Which aims to get women to upload their self-esteem by not compare to beauty standards that are not real (especially standards models for L'Oreal, hyper made up and whose images are systematically retouched treatment programs image [which also make all beauty magazines, the heart and in general all the press reports lives of famous / as]).

So DOVE chooses ethics as the basis of its market position. This type of positioning is typically postmodern and aligned with the philosophy 2.0 of the network.

The paradox that a brand using the anti marketing to be known, is also a typically postmodern characteristic. Companies try to get into the skin of the consumer, thinking as he and launching a series of smart messages against the established by the very society of which they are part. Mystify the receiver of messages but get connect to it.

We can see these messages in ads Viceroy (The watchmaker). Antonio Banderas remember saying "It's not what I, what I am," or Shakira wondering why they have hired to watch an ad if she never takes any.

Some brands try this yourself, but do not.

This is the case for example of Dior with ads starring Charlize Theron for the perfume "J'adore Dior", Which appears shedding all her jewelry and clothes saying"feel yourself"When Dior is precisely a brand of fashion products (the paradox would be a" stance "Postmodern, yes), but to appeal opulence and luxury goods, while choosing images for the campaign showing luxury and opulence, where Charlize is makeup to the eyebrows and retouched every pixel I think is too brazen. It shows that in the background, Dior does not believe in "feel yourself"Preaches and continues to manipulate images and showing imaginary worlds and inaccessible (which is really what sells).

In times of 2.0 and social networks, hypocrisy is a bad bet. Transparency and consistency in advertising are the foundation of Marketing 2.0. In this subject (in coherence 2.0) I recommend reading the article published in Marketing News: "When it is the best business ethics for a brand”

Final note:
By the way, I think the first time I saw this announcement was thanks to a mail Neighbor Maria the AGIMA network (Mary is ethical marketing expert and professor at the University of Vic ... and former partner at Intercom). From here I send a greeting :-)

Review of "THE CODEX SECRET" by Lev Grossman, Byblos -... New Google service: Books Ngram Viewer (speaking on what the book ...
Scroll to top