Does Google's Golden Triangle is still valid? The answer is yes

Who else who has less ever see a heat map that runs through the network, Eyetracking done with technology and showing what is called "The Golden Triangle Google”: The golden zone in which you have to appear if you want to be something on the web… the space where all the eyes of Google users converge. I myself, I have used it a great number of times in classes and conferences, to graphically show the importance of appearing in the top positions of Google, be it in the form of Adword, Whether in the form of natural positioning (SEO). 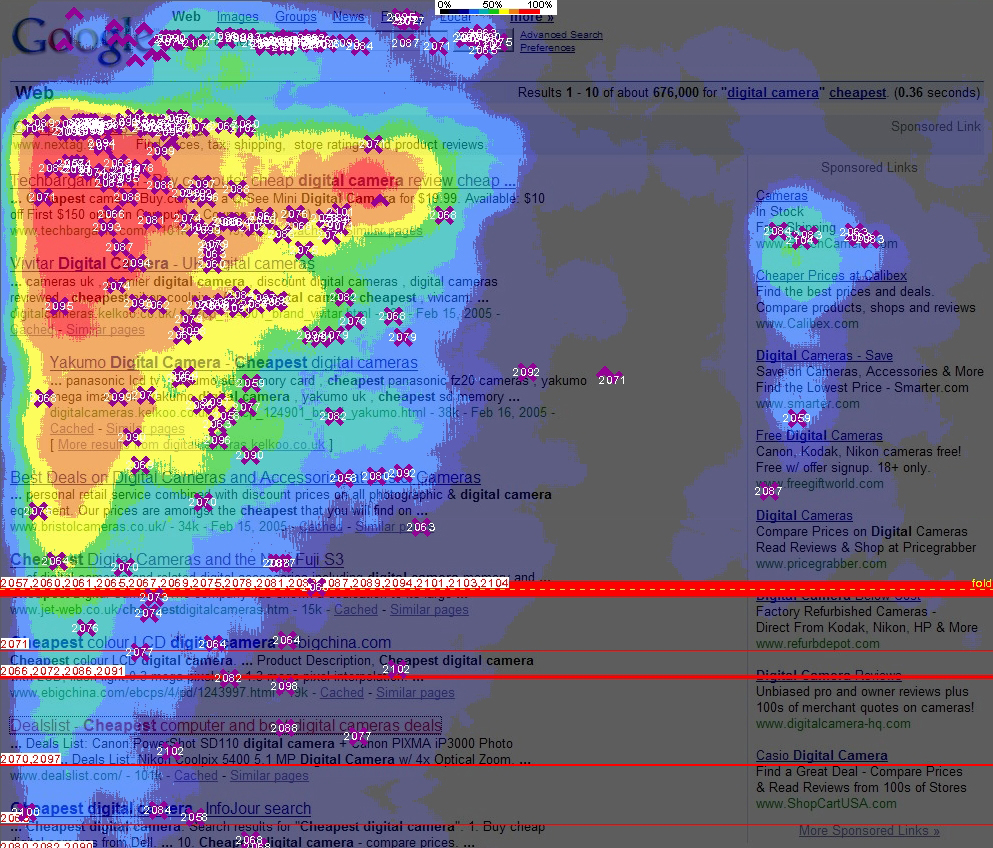 But this heat map has its years, and every time I use it I wonder whether it will be really valid now that Google displays results including maps, books, definitions, etc. (The image I show along these lines corresponds to the classical heat map to which I am referring).

Hence one of the things I wanted to test in testing we have been doing during the months of December and January to draw up a study of Search Marketing-oriented tourism, using technology Eyetracking, was whether the Golden Triangle was still valid , or otherwise, now he appeared another geometric figure. This is the study: Eyetracking Search Marketing

Well, after performing the tests (54 individuals by testing 4 different tasks, altogether 216 heat maps results pages Google), we conclude that it remains valid, especially when very specific searches are performed and offer results found in the top positions, although the lateral Adwords are now most watched shows the classical triangle. 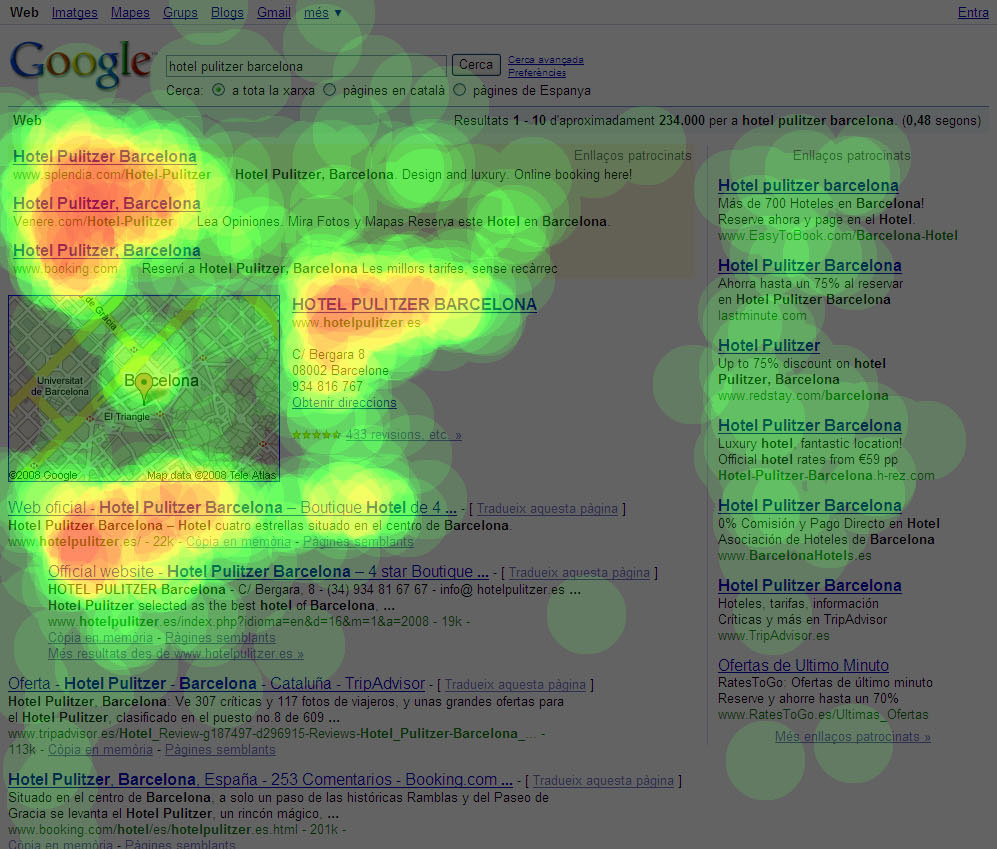 Let's look at some of these heat maps:

This I show below is a heat map to search "Hotel Pulitzer Barcelona"(Without quotes) adding the maps of 30 users tested, taken at random and untargeted. The task was to find the URL official Hotel Pulitzer (he was both Google Maps and the first result SEO). I show the map is a map of percentages fixing eyes (the same type the "classic" only that our EyeTracker different).

We can see how the triangle is formed, though somewhat blurred because of the map.

If this same heat map we show by absolute values ​​of fixating, then 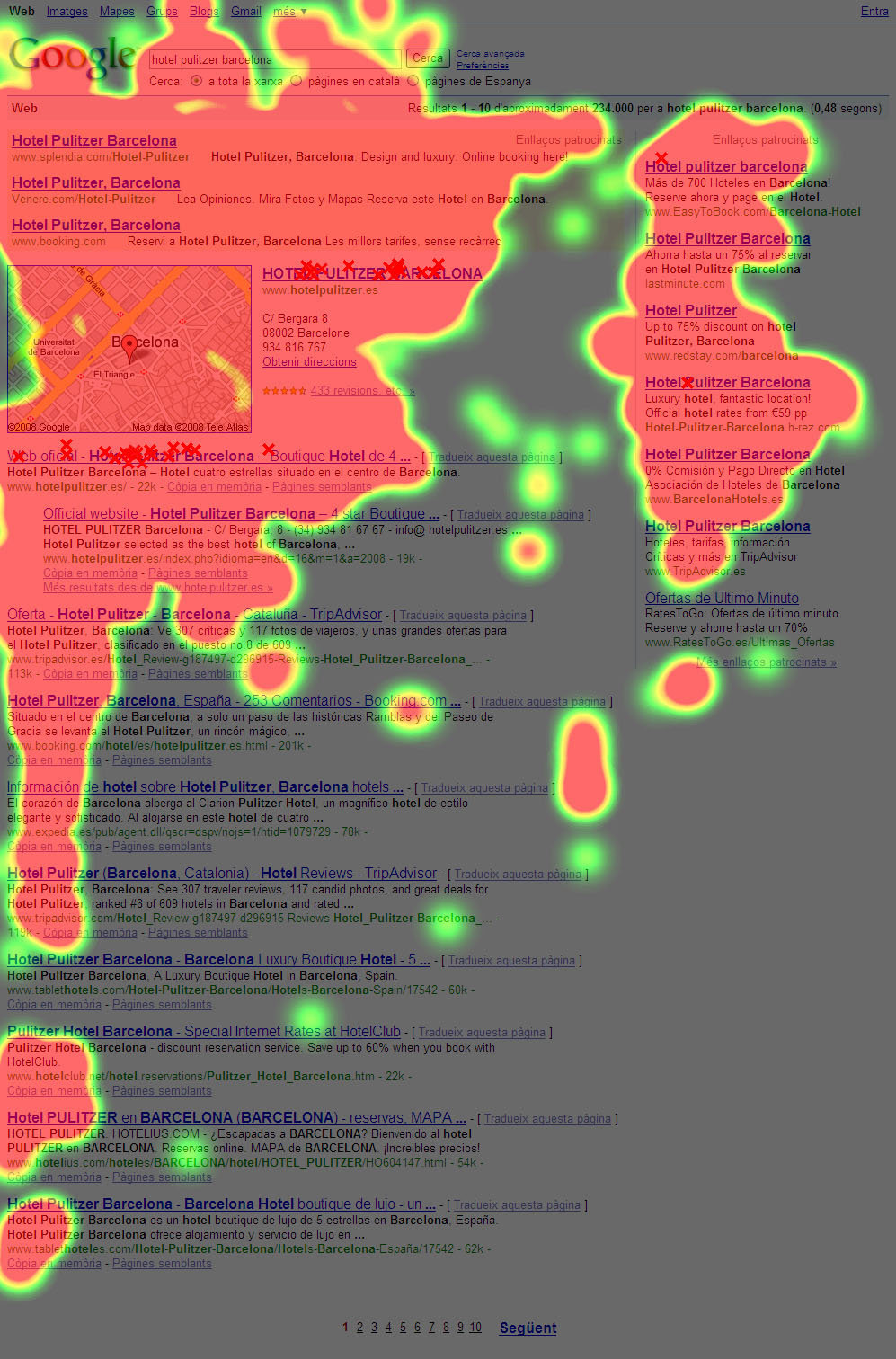 If we see the triangle, and we also note that some users have looked at the Adwords side, which is barely visible on the map by percentages. (See attached image)

A curious observation about the side Adwords: If this same search took, heat maps users under 25 will see something very different: not one has looked at the side Adwords and the triangle appears clean but somewhat disfigured, and focused on higher Adwords and natural results.

It seems that those under 25 are very clear that the lateral Adwords are advertising and therefore do not deserve your attention ... (this topic is important and worth analyzing further because it refers to the theories of communication Postmodern well that both the map and the subject I discuss in another post).

The complete study can be downloaded here:

The complete study can be downloaded here: Eyetracking Search Marketing

This study may also be interested in other analyzes gaze on whether users see or not see advertising. Eyetracking_Media_Espana

Review of "CULTURAL TOURISM" José Antonio Donaire - Publishing ... Review of "THE CODEX OF ATLANTIS" Stel Pavlou of - The ...
Scroll to top