As I mentioned in my previous post, during the months of December and January we have been conducting a study aimed at Tourism Marketing Search using Eyetracking technology. (Read previous post)

Well, we did another test users to testeábamos was to request that they should seek a hotel in Barcelona making Google search "hotel Barcelona" (without quotation marks). 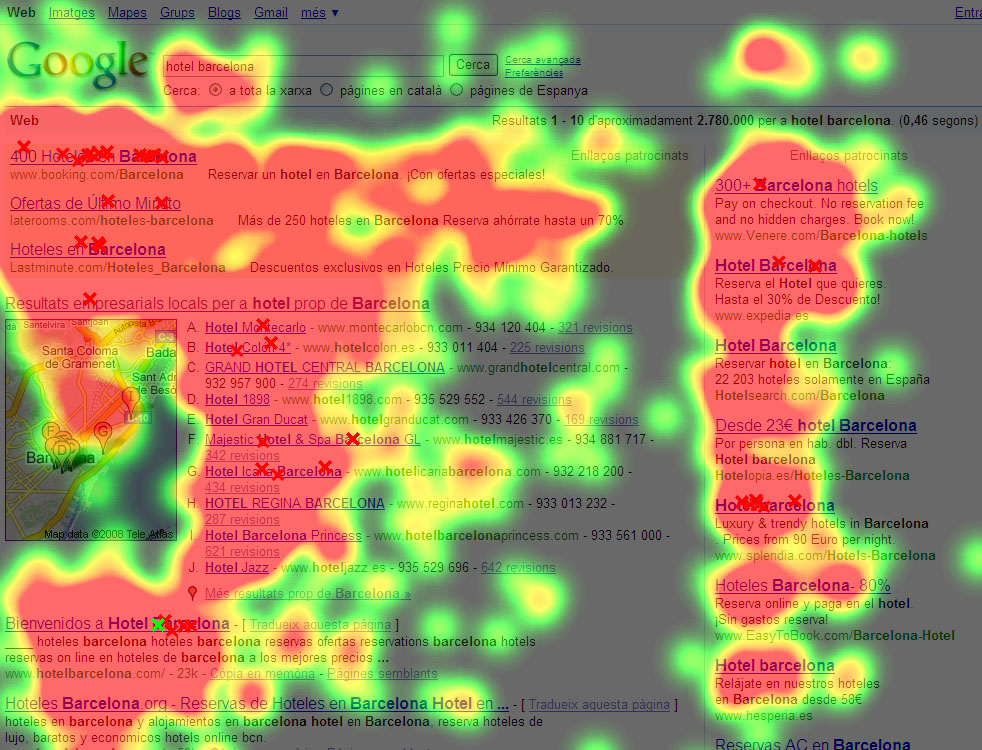 So let's see why people CLICO where CLICO:

So let's see why people CLICO where CLICO:

When we asked why users had clicked where they clicked, most of which clicaron on a brokerage site indicated they did on that specifically because they knew him.

People who clicaron about hotels, also said it was because they knew him or because they had heard and knew the hotel was nice, and was well situated, etc ...

In some cases, users indicated that the ad title was what had most caught their attention. Especially the "400 hotels in Barcelona” de Booking.

In other cases, certain words caught their attention, that users did read the title and accompanying text and clicaran. This is the case eg in Splendia Adword 5 position shown on the left ... a place where almost theoretically would not have to receive clicks.

The theme of the words that draw little attention and get people to fix their gaze and click there, deserve special analysis ... so these words will discuss in the next post.

... and another interesting thing related to this research: between the results shown in this first page natural positioning (SEO) only appear 4 hotels. Well, 3 of them are hotels that we have done consulting position to reach on this page: Hotel Pulitzer, the Axel Hotel and the Hotel Royal Ramblas. It is something that all members of GEA Internet we are proud.

Later note: The study has already been published. You can download it here: Eyetracking Search Media .

Google Maps vs SEO: SEO keeps winning Certain words stand out. "Luxury" is one of them.
Scroll to top