A Japanese ship was launched on Monday, with two solar sails inside, to be tested in space. Something that until now was only science fiction can be reality in a few days. 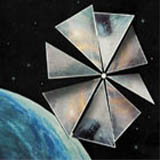 (Image: Illustration of the possible form of a solar sail)

We live in a wonderful era where every day are produced dramatic advances in technology. Although I confess that when I was 20. I was convinced that at 30, live in a Martian colony (no kidding). Now that I have 30_y_algunos, I see that everything is going much more slowly. But ceases to amaze me that things like solar sails, which until recently were only a product of science fiction, is now being used to propel spacecraft.

As with the space elevatorArthur C. Clarke in his book "El Viento del Sol" (Alianza Editorial - 1987) tells us among other stories, what a race with solar sailing and what techniques should be used to go in the opposite direction to the sun or travel distances where sunbeams are weak.

In this book Clarke is clear that while the value of the energy produced by photons on the sail of a solar sail is very low, as is a continuous (and free btw) acceleration, it is sufficient for a few days after have left Earth and thanks to the absence of friction, the ship can reach 3,000 km / h with zero fuel.

As this seems Science Fiction 100%, it turns out that it is not. In today's edition of The New Scientist He explained that last Monday on August 9, 2004, a Japanese ship proceeded on the basis Uchino Space Center in Kagoshima (southern Japan) with two candles to be tested in space.

If the sails work, fuel for interplanetary navigation would be virtually unnecessary.

(Image: Another illustration of the possible form of a solar sail)

Now only missing to dispense fuel to overcome Earth's gravity ... but we fixed it already with the space elevator :-)

The theory that speaks of power over the candles, is nothing new, the theoretical basis on solar pressure was established by Maxwell in 1860 and recognized by Einstein in his work on the nature of light. Although so far no one had dared to conduct experiments in space, directly with candles (yes they had done in the upper atmosphere ... and failed).

I robot. Or how a poor job of marketing can kill a pelícu ...

A9 discover how it works: the final version of the browser created by ...
Scroll to top