Why do Google and eBay open their source code?

Quick to "why" answer: so what is the logical evolution of a Save the Metcalfe a Red Group. If you are interested in topics ... read on.

Lets start by the beginning:

Contents of this article

What is a Network Metcalfe?

A Save the Metcalfe is a business with a particular structure thus generating value from Metcalfe's Law.

What is Metcalfe's Law?

Metcalfe's Law postulates that the value of a network increases as the square of the number of system users. This is not true 100% (after I explain why), but the truth is that this law is of great application to determine the expected growth for a business and creating value that is linked to this growth.

The structure of traditional business

(Whether they are online as if you are offline)

In a traditional business, a provider offers a service or sell a product to a number "n" of customers. And the number of potential transactions to be performed in a given repeat customers without time, exactly equals the number of customers you have. (See Figure 1) 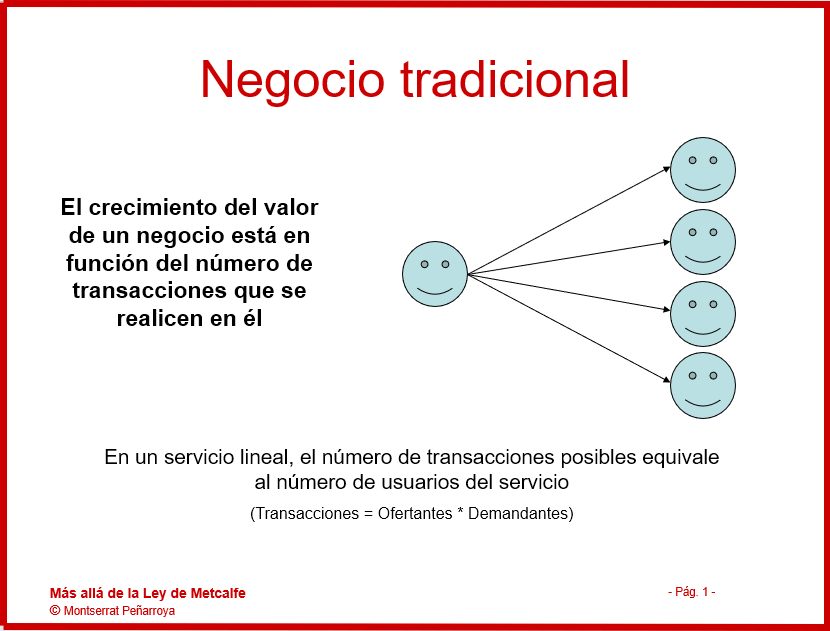 The value of this business depends on the number of customers who have (of course, there are more factors that influence business value, but in a hypothetical formula for calculating the value, our "n" is one of the variables ... and it is in this article we will analyze).

The structure of business networking

The first person to apply a law on this kind of behavior in a business was Robert Metcalfe (or so the legend goes), inventor of the Ethernet when Xerox invented the first laser printer in 1974 and did not know how to connect more than one computer while this printer. Metcalfe's Law It postulates that the value of a networked system grows at approximately the square of the number of users of the network itself. (See Figure 2) 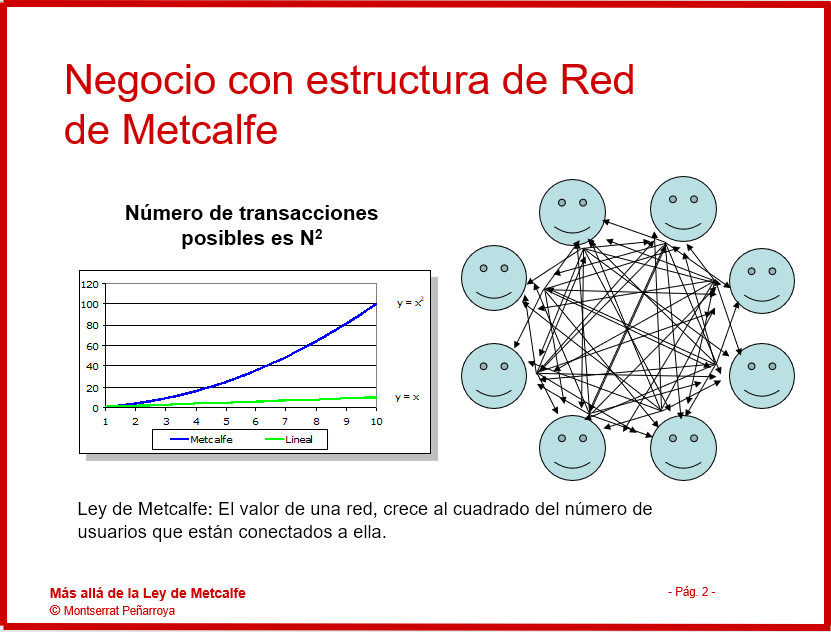 Hence, businesses with circular structures where all users can be supply and demand at the same time, are called Metcalfe networks.

The webs of contacts that are proliferating so much in recent years, are also clear examples of beautiful redes de Metcalfe perfectly round. And I say round, because there are networks whose structure is not round like the one in image 2. They are networks where there is clearly one side with supply and another with demand. In that case, the number of potential transactions is still supply * demand, but it does not tend to the square since they are different numbers. Of course, they are raised to a coefficient that is greater than 1, which would be that of the traditional business; but it is less than 2, which would be a perfect Metcalfe Network.

An example of this type of network would be SoloStocks.com not perfect, where companies sell their stocks, are not all potential buyers of stocks (except if all brokers ... then yes, you see the difference?). (See Figure 3) 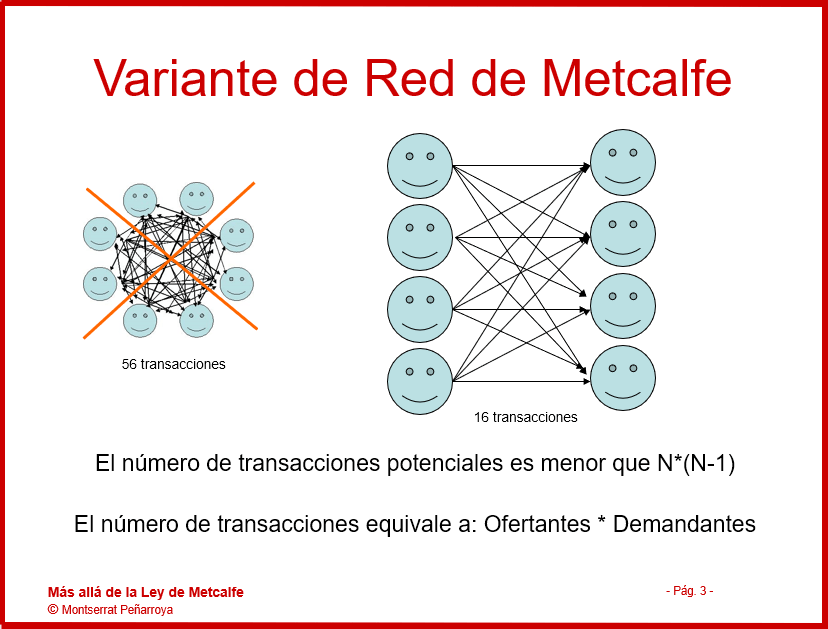 If the number of potential transactions in a perfect network Metcalfe 8 users would be 8 * (8-1) = 56, the number of possible transactions in a network noncircular 8 users (4 suppose that offer and 4 demanding) it would be 4 * 4 = 16 ie the coefficient network externality that market would be 1.33 instead of 2, and therefore value generation grow at lower speeds than those of a Save the Metcalfe perfect since it offers more value to its users, but higher than those of a traditional business that offers much less.

Well ... if you have not giddy with both numbers and letters, and you read on, we will pass to the next level of evolution of a network and discover finally :-) why eBay and maybe Google (judging by the rumors by the network) open source code:

When a Save the Metcalfe technology allows users to organize around common interests or goals, begin to appear small Metcalfe networks gravitating around a large network to which the feed. (See Figure 4) 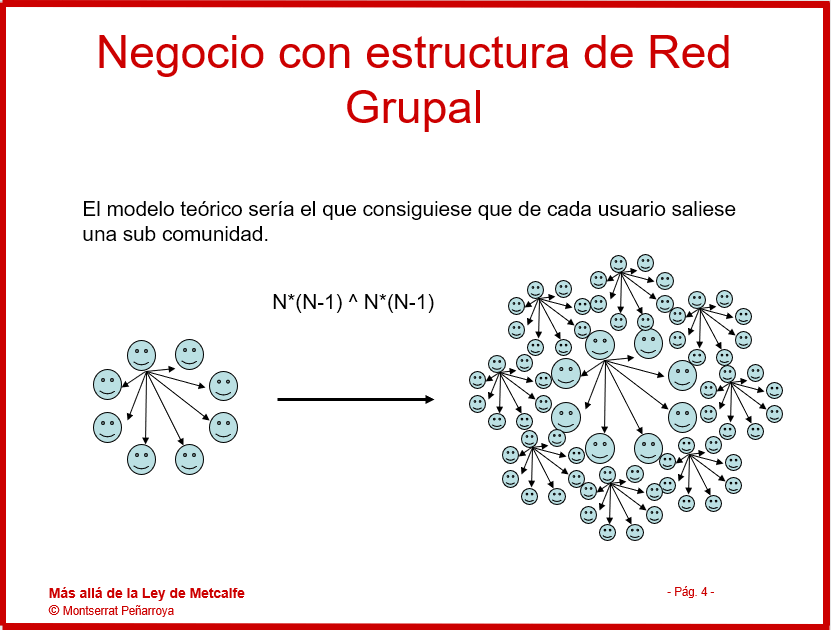 For some time, eBay has been creating or participating in the creation of small sites specializing in certain types of auction and, therefore, has evolved into this model of network structure reminiscent of a daisy. Opening its code, leads to an infinite number of programmers begin to develop applications that revolve around the great network and eventually forming daisy petals.

With closed source, only they can create the petals. With open source have a chilling potential of possible petals to be created.

Growth Networks group tends to this formula: a ^ n, where "a" depends on the number of possible channels that can be opened, and where "n" is the number of users.

The theoretically perfect business would be one that consiguiese that for each user of the main network, possible to create a subnet. Its structure would be something like: n ^ n (I know of none and I'm sure it's just a theoretical model ... but the less, it is interesting to keep in mind).

Traditional businessesGrow linearly as the number of clients (plaintiffs service) having: supply * 1 * suit or buyers

Businesses with network structure MetcalfeGrow almost square of the number of users who have: n * (n-1) or simplifying: n ^ 2

If you have not already bored and you're still reading, here's a gift:

What happens when you join several networks Metcalfe?

Growth Metcalfe two networks together is greater than the sum of both growth separately.

Is not it beautiful to see the word "synergy" represented mathematically?

If you want more information about Metcalfe's Law, you will find it here.

AskJeeves not adopt the model of payment for indexing Cassini and the Huygens probe to Saturn are coming ... with my ...
Scroll to top
Guide to create your Online Action PlanDiscover the 6 steps that will make your company grow online

If you don't even know how to start your company's Online Action Plan, here is the solution !!! This guide will help you create the plan in 6 easy steps and will enable you to execute them. Do not miss it!