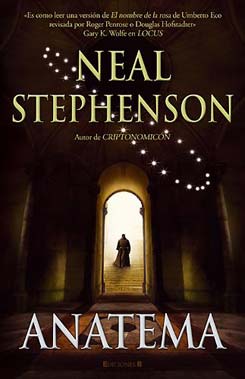 I believe that Anathema It is one of the best science fiction books I've read this 2009. But I am obliged to warn in advance that it is not easy to read and it is necessary to perform an act of faith during the first 150 pages of the book. That said, the typical good book by Neal Stephenson: great prose, good sense of humor, impeccable setting and well created and deep characters. all a joy. If you also like philosophy, music, mathematics and science in general, then you would not stop reading.

Writing this review will not be easy (hence this task has been delayed a few weeks), there is much to explain and much to consider.

As far as the argument is concerned, Stephenson unveils us little by little the story of a planet called Arbre, like Earth but not the same, with a history of collapse and social and cultural rebirth that has taken so far in which the action of this book lies. The actual plot begins with the discovery in the sky Arbre of an alien spacecraft orbiting the planet for two years. Our protagonist and his companions sources (As Arbre vocabulary, people who have sworn to follow the Discipline Cartasiana and they are living in a kind of monasteries called concentos) Shall establish contact with the ship and try to understand these strange beings coming from elsewhere and not chemically or culture share with the people of Arbre.

Without warning, Stephenson puts us squarely in the culture of Arbre, using vocabulary and concepts of Arbre, which for the poor mortals of Earth are really hard to understand (these are the 150 pages that need to overcome in order to fully enjoy the book) ... in the end, total immersion is appreciated and you see that gives the book a rich and exquisite dimension that would otherwise not be achieved, but at first ... phew, you have to repeat yourself like a mantra "this is a book Stephenson, I have faith"A few times, to keep going and not give up when you get whole paragraphs that do not understand ... to illustrate, here's an example:

... This paragraph corresponds to page 120 of the book. I promise to prospective readers that by the end of the book, passages like this are totally clear and understandable ... at least as regards vocabulary. Little by little you discover that a "cismex"It is something advanced to a mobile phone, a"syntactic device that uses quantum theoretical"It is something like a quantum computer and when referring to a Faraday chamber do calling it a 'Cesto of Bucker Sante"... It ends up being even fun to appreciate the changes in vocabulary.

I selected this paragraph in particular for another reason: the "...cantaron and motets". And I thought that probably only the 16 geeks that we meet every Wednesday to pay tribute to Piarist father introduced us to music 30 years ago and we respect singing motets in his honor, knew what a motet !!! It turns out that Stephenson knows, and what is more important in this case, the translator of the book also knows !!! In fact, the great honoree commenting Anathema should be the translator, so I'm going to devote the next paragraph of this review.

Pedro Jorge Romero: This is a Galician-making that I think is my age (1967 ... c'mon) and I admire for his work, for many years. I think I discovered it around 1995 on the Internet in news groups devoted to science fiction. Already in 2003, 2004 and 2005 while I was in Noticias.com sindicaba RSS content your blog to incorporate the articles published in this newspaper online, for its originality and because I loved. Peter George was also a fanzine editor BEM Science Fiction that was all the rage in the 90s, and the alma mater of Nessus file (An extinct website dedicated to science fiction). Along with Rafael Marin (another author and translator who has stolen my heart) are who translate a large part of the books of Ediciones B Nova collection, dedicated to the science fiction and directs Miquel Barceló. I know that some credit that enchant me Neal Stephenson's books is thanks to the work of Pedro Jorge Romero. So I am very grateful. In the case of AnathemaThe work of Pedro Jorge must have been very difficult and deserves my sincere compliments and congratulations.

In short, it is a book that I loved, which is long to read through more than 700 pages, but after the first 100 pages is bearable, but you end up with wrist pain if you try to read several hours. The book suggests dream and, above all, as you discover why why the alien ship is in orbit Arbre.

The book is 100% recommended if you are an advanced reader of Science Fiction, for someone starting out would not recommend it because it is too "hard" to start both the CF and Stephenson's world. Instead, it would recommend starting with reading Stephenson Baroque cycle, with the Criptonomicón or even better, Snow Crash which is much simpler, if you want to get into it gently.