Last January 27 took place in Intercom 10 years SoloStocks. Although as indicated by its current CEO Philipp Gavaldà, the date is not exactly this since there was a name change through and there was also a small corporate change.

The actual chronology was roughly as follows:

The market place has lasted more than 10 years online, and the times, this is quite an achievement. In addition, we must conclude that it does in full power, constantly growing and developing new markets.

Currently, SoloStocks has 400,000 active compounds (ie, that are on sale at this time), more than 1 million registered users and over 5 million unique visitors per month. It is the largest B2B marketplace in Spain, both registered as visits to your website business. Quite an achievement !! 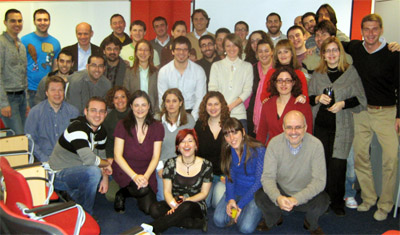 So there is much to celebrate, there will be organized a great party and that we should celebrate these 10 years all together.

The party took place at the offices of Intercom in Sant Cugat and we met a lot of people. I took a visit to greet old friends, catch up on their new achievements and as always in these cases, ask for one and all for absent members ... so that somehow it was a celebration a little nostalgic, but no less interesting and fun.

The attached image is a photograph I took at the end of the celebration.

I hope that within 10 years we can celebrate together again and again!

On the importance of Culture and going back to the Theater

About Courses, Masters and Graduate Studies in Digital Marketing We give the website the hotel you need it most
Scroll to top