Tag Archive for reviews of books by other authors

You are here: Home1 / Montse Peñarroya Blog2 / Reviews of books by other authors

This is a book that is read at a time and engaging from the first page, but it is not science fiction itself (increasingly costs more to find science fiction in bookstores), it is a technological thriller with a good base is key scientific and military context.

If not because it is clear that the author is Matthew Reilly, an Australian born in 1974 who had not read anything above, as indicated by the review of the New York Times, it seems that he has written himself Michael Crichton or Clive Cussler by fast pace that prints its scenes and suspense generated at the end of each chapter.

A team of US marines, a charismatic but miss time Lieutenant Shane Schofield at the head, goes to the polar station to protect the find, while in the United States a journalist investigates about conspiracies between the military, the CIA and other government agencies, and a former military look to unmask infiltrators into the body of the Marines, one of these agencies.

In short, it is a good book for a weekend of fun week, but not forcing you to concentrate on the details or plantearte existential dilemmas. Personally, I have learned a lot about military weapons and strategy. That said, it is a book 100% recommended. 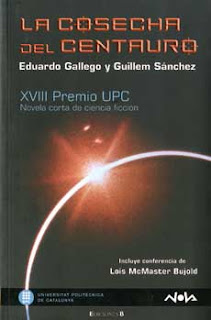 Like all books NOVA Collection, the book includes a presentation of Miquel Barceló (without detracting from the content of the books, the presentation of Miquel Barceló is one of the best things about this collection). In this book also it gave the conference included Lois McMaster Bujold in the ceremony of the UPC awards. Still, I've missed you too advertize any of the finalists and the winning play section UPC students ... are usually interesting and different works, and in previous editions published them in the same book by the winning work ... What will the crisis?

Only by developing the "first encounter" and the subsequent relationship between the two groups of settlers of the two arms, the book and promised to be interesting, but the authors have not been satisfied with this and have included in the plot to a powerful alien species it is dedicated to plant life different planets, and then returns to "pick up" their harvest.

Following this argument, some of the remaining planets to collect, are located in the human site arm which has developed more biology, and the imminent danger that leads to the appearance of these aliens causes the representatives of the two companies human unite to collaborate and solve the mystery of harvested planets.

As this is a short novel, the book is read in a couple of days and leaves you wanting to know more about human colonies and the interaction between them.

About the Authors: Eduardo Gallego is a biologist and professor of mycology at the University of Almería. Guillem Sánchez He is an economist and military history buff. Together they make a good tandem. I had not read anything about them so far, even though Miquel Barceló indicates in his preface that both are known in the world of Science Fiction Spanish, so we'll look to amend my mistake and read more books by these authors.

In short, a book 100% recommended, which leaves a good taste and makes for a fun weekend.

“Best of Connie Willis I"It is a collection of 11 short stories by this author.

As there are in all collections a bit of everything, both literary quality level and at the level of issues. This book is no exception.

Some stories are really interesting and very reminiscent of some other books by Connie Willis. For example, reading the story "Fire Brigade", you can not help but evoke "The Book of Doomsday" (one of the works that I like about this author).

Another tale is that I liked especially the "Late Cretaceous" in which the consequences of a budget adjustment in a Faculty of History narrates. really hilarious situations occur.

Instead, stories like "A All my Dear Daughters" I found a story quite filling. But hey ... this is going to taste ... and I do not like it.

If you don't even know how to start your company's Online Action Plan, here is the solution !!! This guide will help you create the plan in 6 easy steps and will enable you to execute them. Do not miss it!