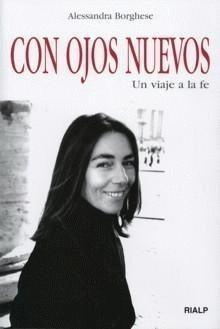 This is a book that leaves what accustomed to normally read (Science Fiction or professional reading) is. In fact, not even bought it, I gave it to a friend who thought I would like to dedicate a few hours to meet Alessandra Borghese. And this is what I did, I spent a weekend reading this book.

The book is an autobiography that tells the story of the author since, at age 16, one of his commits suicide in front of her friends, until his conversion to orthodox Catholicism. Going through an unhappy marriage (and subsequent death of her ex-husband), for his work in New York at American Express and as a promoter of art exhibitions and back to Rome.

Of course, with this synopsis, not a book that invites reading. But the important thing is not what happens to the author, if not the reflections that goes along by the narrative of his life and end up taking her to rediscover the Catholic faith and to look "with new eyes"Its existence and everything that surrounds it.

And the truth is that it gets you to think and look sense of what you're doing in your life. So I gave it to my friend, and I thank you.

The book consists of three parts. In the first, the author places his life in a social context and some events that shape and become someone rather frivolous and fun-loving without a clear objective. In the second part, the house of cards on which mounted their daily lives is decaying, and begins to see the need to create a stronger basis for their existence. In the third part, he speaks and his conversion to orthodox Catholicism and the new direction of his life.

This last part is a bit confusing because it speaks of liturgical issues and theory of Catholicism that did not know existed ... but precisely this lack of knowledge makes it interesting to read about it.

In short, as I think it took me about 3 or 4 hours to read it, my verdict is worth spending the time and then get a few hours to reflect on what they read. The book leaves no one indifferent.