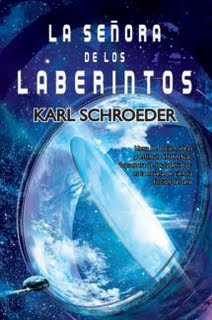 This is an interesting book that creates dreams and frees the mind of any concern is. A balm before going to sleep. While reading requires absolute concentration and certain intellectual effort that thankfully is rewarded by good hour that makes you spend while you're reading.

The book puts our characters in a distant future in which the solar system is colonized by humans, in which some humans have evolved to something beyond and in which artificial intelligence has evolved beyond all expectations.

Our protagonists live in Corona Teven habitat located near Jupiter and has toroidal form. Surely a world inspired by the Ringworld from Larry NivenBut unlike the latter, its inhabitants do not live isolated from the rest of humanity, if not with other human habitats by neighbors with which the founders of the crown are related when they want.

both Corona Teven like the rest of the human universe, it is colonized by millions of people who can live together, just are not all located in the same plane of reality. Thanks to what the author calls collectorsEach company can create an environment in which to move and interact with their fellow people without interfering with other companies. That is, that in the same physical point can live many companies created by collectors different, without interfering with each other. Each company created by a manifold it is a culture in itself, with a history, mythology and unique technology, though virtual. The interaction between humans of different collectors is limited and one of our protagonists is a diplomatic moves between companies of different collectors and who will be discovering us how your world.

This theoretically idyllic society begins to crumble when an entity called 3340 begins to interfere with collectors and try to knock down the barriers that keep technology under control.

In the book we nanotechnology, terraformaciones, virtual reality, interstellar travel, IA God, human post also believe that God is believed and countless other things that make your reading is really a joy.

The author, who has a way of telling the story reminiscent Greg Bear, Strives at all times to make credible the universe and explain the philosophy of its people and its interesting political system based on the theories of open source we all know.

In short, 100% recommended a book worth reading.