Review of "A GLEAM IN HEAVEN" Kay Kenyon - The Factory 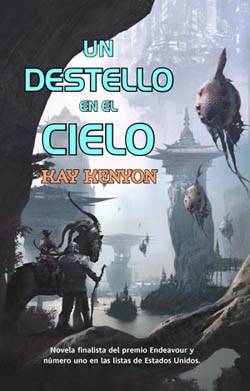 A Flash in the sky It is a different book. In some ways is the typical science fiction book "discovery of alien world", but the world shows us is really original, well built and worked characters.

The story tells the adventures of space pilot Titus Quinn in a parallel universe that you accessed through a kind of wormhole when he was in space mission.

The first time you visit this parallel universe (christened Omniverso by Kay Kenyon) makes it by accident and with his family. The family is stranded in the Omniverse and Titus Quinn appears in the normal universe, without memory and with 14 years more (although in the real world have only been a few weeks).

The corporation you work for it apart from all spatial plan and ostracized because they do not believe anything that has (small pieces of memory). Time passes and the protagonist is plunged into a deep depression, until because of an accident in another spacecraft, the corporation begins to give credence to the possibility that there is a parallel universe and decides to organize a mission to investigate.

He Omniverso which tells us Kenyon is interesting. It is home to different races, some humanoids. For hundreds of years, from Omniverso You can see parts of our universe, which made flower a whole similar to the medieval Chinese culture, although race that dominates and has subdued all the Omniverse, the Tarig not know where they come from, have sophisticated technology (with travel space included) and fears our universe.

At times the Tarig remind Goauld from Stargate, Although the construction of Omniverso It is completely original and more or less consistent.

The only criticism I would make is about the irregular rhythm of the book. At times get bored, others get to read hours on end. It is also somewhat disappointing when as it nears the end're realizing that the author can not finish the book on pages remaining and you begin to suspect that there will be a second part. When you finish the book, it is clear that it is only a first part, and when you investigate a little more, you find that is the first of three books (A World Too Near Y City Without End). This explains some scenes filling and uneven pace of the book.

About the author: Key Kenyon. It is interesting to know who started his career as an advertising writer and actress, and this explains in part the freshness of its proposal and originality. This is his eighth novel and has been a finalist for the Philip K. Dick Award and the John W. Campbell

Review of "CHILDREN OF PARADISE" by Nick Sagan - La Factoria ... Review of "WITH NEW EYES" Alessandra Borghese of Editions ...
Scroll to top