Review of "TITAN" Ben Bova, the Factory of Ideas

This is a book of science fiction classic that will appeal to fans of the books of CF is lifelong. In him we have space exploration, descriptions of new worlds, sense of wonder that spreads the reader, sociological analysis of companies subject to the restrictions that entails life in a small habitat, etc. 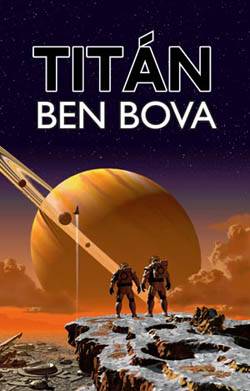 Read a book like this, from time to time, is comforting, but at the same time, is remind a how much has changed science fiction, and therefore how long it takes reading novels of this genre ... and unequivocally, it always ends remembering how old a ... but ... let's leave this issue and focus on "Titan".

Reading "Titan" You would say that you are reading a novel written in the time of the two late great masters: Asimov and Clarke. But no… Ben Bova wrote it in 2006. Once you know this information, you can't help but wonder if this Ben Bova will be or will not be the same Ben Bova, editor of Asimov and of many other Science Fiction authors, winner of countless awards. awards and mythical in the world of CF… and it turns out that yes, it is the same. Which leads us to think, how old does Ben Bova have to be? Luckily we have Wikipedia that gets us out of these troubles and offers us this type of information. So we discover that Ben Bova was born in 1932, which is therefore 77 years old (See Ben Bova in Wikipedia) And that indeed is the same Ben Bova who have spent years following through the books we read, but which, as far as I'm concerned, there was a silence that has lasted nearly a decade.

It is not surprising then that the book written by this author seems out mismamente an open fracture time in our library. It really is from another time.

Jokes aside, the book is well written and the narrative has rhythm. It reads very quickly, except perhaps for some part that refers to an electoral campaign in the habitat in which our protagonists live (and which I imagine is not the author's fault, but rather the saturation in electoral campaigns that we readers suffer), and leaves a good taste in the mouth.

The plot tells us about the adventures of several characters who live in a gigantic colony ship (which is very reminiscent of the ships in the various Rama de Clarke books) and which orbits in space near Saturn. On this ship we find scientists who are studying Titan (one of Saturn's satellites), we find scientists who are studying Saturn's rings, we find retired astronauts, a habitat manager who has no qualms about perpetuating his power in it, political exiles, and endless secondary characters that give dimension to the rest of the characters and create a context in which a credible and interesting story can unfold.

The book without hesitation, is 100% recommended.

I read somewhere that this book had been written taking advantage of the interest generated by Titan following the landing of the European spacecraft Huygens, who was traveling inside the NASA spacecraft Cassini and reached Titan in January 2005. It is possible so be it, although the Castilian version of this novel has come a little late to Spain and here in 2009, almost no one remembers or Huygens and Cassini as names of spacecraft and space missions, but as scientists who they took their name.

While writing these lines I realized that I knew nothing of these ships for some time and I have sought information. I discovered that no news about them since July 2008 ... I guess Huygens should be abandoned on the surface of Titan and Cassini should be orbiting Saturn sending data to NASA ... so ESA is concerned, the mission ended in 2008.

For those who want to refresh your memory on these ships, here are the links:

The 5 things we should all test using A / B Testi techniques ... Who Bing, Google or Yahoo to be charged?
Scroll to top